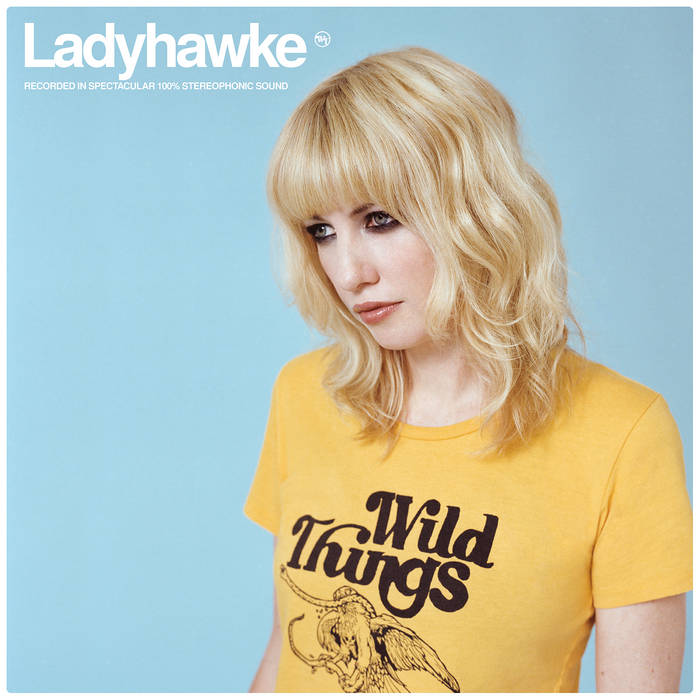 David Thomsen I saw this performed live and it was one of the best gigs of my life Favorite track: Let It Roll.

Robert Day It is summer 1987. I have just spent the afternoon in the arcade playing Outrun with my friends. I transferred Wild Things to tape from my CD this morning, and now I slip the copy into my walkman and sit in the sun on the beach with the most perfect pop I've ever heard swirling through my head.

Well that's how this feels to me anyway. Favorite track: Chills.

Alonso Lizaraz This album is a masterpiece from the beginning to the end, the finest since her first record!! Favorite track: Wild Things.

Rich Hims Always felt like Ladyhawke gets a little pigeonholed as a pop act, with the catchy synth hooks providing a veneer of superficiality over a heartfelt story across the album. Favorite track: The River.

Jen I love a good pop song! This album is packed full of them - and synthy pop too! Makes me want to sing into a hair brush with a perm and a Pepsi! Favorite track: A Love Song.

Daniel Flores Tafur This is a perfect pop album. All song are great, all have memorable hooks and you’ll want to listen to them again and again. It really shows that songs are backed by real feelings here. I put “A Love Song” as my favorite, but really I can hardly decide between it, “Dangerous”, “Sweet Fascination” and “Money To Burn”. Highly recommended. Favorite track: A Love Song.

“People wonder why there’s always a massive gap between my albums,” says Pip Brown, better known as Ladyhawke, the one-woman synth-pop act from New Zealand. The reason is both complicated and easy. The simple explanation: “I’ve never released anything I’m not proud of. That’s important to me. I don’t want to release anything that I have a weird feeling about.”

Brown’s conviction to authenticity led her on a journey starting in 2013. Over three years, she scrapped a full Ladyhawke album (“The material didn’t feel like me. It felt too dark or something”). Once reliant on alcohol to surmount social anxiety (“I’d never done a sober show in my life until last December”), she quit drinking and focused on getting healthy. Then she welcomed that newfound clarity by crafting her latest release, the blissed-out Wild Things.

“I think I went even more synthy and poppy this time around,” Brown says of the buoyant Wild Things. “I feel good for the first time in 10 years. I actually have a clear mind! I have a wife. I feel stable. That is what I’m celebrating.”

The quivering title track, an airy paean to cleaning up and settling down, sits at the heart of the album. Explains Brown, “It’s me realizing I’m so lucky to have somebody to dance around the fire with.” “Wild Things” sets the exhilarating tone for her other deep-dives into relationships, such as “A Love Song,” a sweeping, reverberating revelation. “‘This is what a love song sounds like’—meaning it’s not all sappy,” she explains. “I’d lose everything if I didn’t stop drinking. The other person in your life, sometimes they have to be cruel to be kind.” Meanwhile, the ebbing-and-swaying “Chills,” co-written with Babydaddy of the Scissor Sisters, was more about the visceral response you get when you’re first attracted to someone. (“This is love/This is love/This is love/This is everything,” she beams in the chorus.) “He was on piano I was on bass,” she recalls. “We just jammed that one out.”

All told, she worked on the album on and off over the course of a year—“day here, a day there”—with producer Tommy English (Børns, Tiësto, Dark Waves), whom she met through her L.A. neighbor, tattoo artist/musician Kat Von D. “We sat in a room and would jam around, play around with ideas. Or he’ll sit there making a beat,” she said, of their organic process. “I instantly knew when something inspired me. That’s when we’d run with it.”

For the first time, making an album was effortless for her. “I usually have to fight the voices in my head,” she says. “‘I can’t do this. I can do this. I can’t. I can….’” I’d overthink it.” With the first record, “I was kind of like this overexcited naïve kid,” she explains. But she toured that album for two years and came back “a shell of a person.” Brown was especially disillusioned by the fact that people persisted to think that Ladyhawke was a band. “People assumed I didn’t write my own music.”

By the time she recorded her follow-up, the aptly titled Anxiety, she felt she had much to prove. “My producer Pascal Gabriel and I made the record in France, and it was a beautiful experience. But it was also very tiring and taxing, because I felt creatively drained. The second album was a hard album to make but I was incredibly proud of it.” Making Wild Things was, in contrast, like therapy. “Tommy was good at pushing me,” she says. “I need a push.”

And in many ways, Wild Things is less about past demons and more a catalyst of what’s to come. “This album has given me a sense of purpose. Even if it took me months or years to get that purpose, as soon as I finished that record it was like an unbelievable weight was lifted off my shoulders,” she says. You can hear that freedom in Wild Things’ unabashed exuberance, a powerful, vibrant expression of life itself. “Everything I wrote was all the stuff I was going through. I got it out of my system, exorcised it from my soul.”

Good music for all you good people.

Bandcamp Daily  your guide to the world of Bandcamp